What Is Religion Or Belief Discrimination? 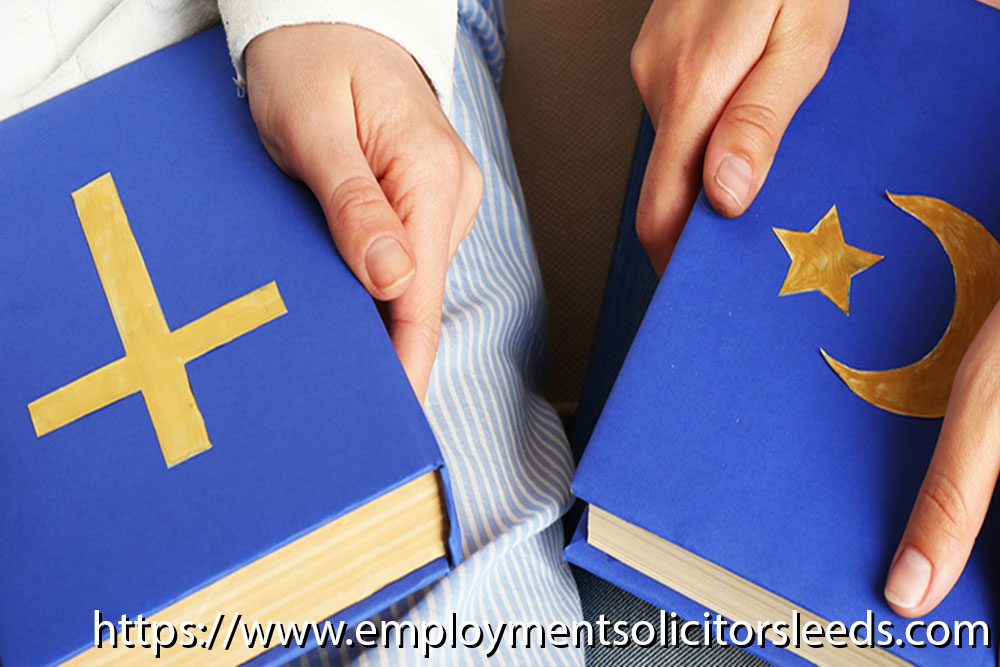 Religion and belief discrimination occurs when an employee is subject to differential treatment because of their religious views or beliefs, or alternatively, their lack of religion or beliefs. This can be a continuous action or by one-off instances of discrimination.It may also occur as the result of rules, regulations or policies set up by the employer’s company.

Our Employment Lawyers Leeds team of Religion and Belief Discrimination will manage your claim with both professionalism and sensitivity, and always in accordance with your legal rights.

There are four key areas of religious and belief discrimination:

All employees are covered by the regulations outlined in the Equality Act 2010. Religion and belief discrimination covers all employees, including management, contract or agency workers, freelancers, self-employed staff, trainees, apprentices and also job applicants. Employees are covered within all areas of employment and training.

The Equality Act dictates that a religion or belief can be any organised religion, for example:

An organised religion is categorised by showing a clear structure in its belief system and offering collective worship to its followers.

Direct discrimination occurs when an employee is treated less favourably to another employee because of their religion, beliefs or assumed religion or beliefs.

A typical area of direct discrimination is where an employee of the same level of efficiency is overlooked for a promotion or pay rise in favour of another employee, purely on the grounds of their religious beliefs. Awarding advantages to employees because they follow the same belief systems as theircustomers or suppliers is considered direct discrimination.

It isn’t necessary for the employer to have the same or conflicting beliefs to carry out discrimination, only that their decision is based on religious grounds when opposing the employee’s performance of the role in question. For example, if a Christian employee is overlooked for a role dealing primarily with Muslim customers, despite having an equally strong work record, the employer is carrying out religious discrimination whether the employer is Muslim or Christian.

Assumed religious discrimination occurs where an employee is overlooked for a specific role because of a misinterpretation of a religious belief, for example, if an employee is wearing a headscarf and is assumed to be a Muslim; whether the woman is a Muslim or not.

If a business holds a particular policy, rule or regulation that doesn’t at first appear to be detrimental to any religion or belief but creates a disadvantage for an employee practising that religion or holding those beliefs—this is indirect discrimination.

For example, some religions require observations of practices or prayer requirements where rules regarding time off or flexible working hours may affect the employee—these rules may be considered indirect discrimination.

Rules regarding dress codes that don’t directly affect the business practice can be viewed as discrimination. An employer cannot outlaw articles of clothing or religious symbols if they do not impede the performance of the worker. However, if clothing causes issues of health and safety where no alternative can be utilised, this is considered allowable discrimination.

Harassment occurs when an employer, or any of their employees, humiliates, offends or degrades an employee or co-worker by their actions towards them in relation to their religion or beliefs. Any act of intimidating, hostile, degrading or offensive behaviour is seen as harassment. It can be physical or verbal as long as it is delivered with the intent of causing physical or emotional distress.

Typical areas of harassment with regard to an employee’s religious beliefs can include:

Acts of distributing racist information designed to provoke hatred,or preaching against religious groups, is a criminal offence. This is also religious discrimination by harassment.

If an employee receives unfair treatment after making a complaint about religious discrimination or helping a co-worker to make a complaint—this is victimisation.

If an employee is treated unfairly because an employer, manager or co-worker believes they have made a complaint on religious grounds or supported another employee in doing so, whether they have or not, this is also classed as victimisation.

An employer doesn’t have to honour any religious festivals, prayer times or practices by law,but they should consider all requests made by employees in a sympathetic manner.They should show reasonable consideration for a resolution that is fair to both parties. In turn, the employee should show the same level of respect for the business as they expect the employer to show to their beliefs.

Respect towards religious clothing, symbols and attire should be made wherever possible by the employer unless it impedes performance or conflicts with health and safety legislation. A mutual respect by both employer and employee should be shown for each other’s needs.

There is no legal jurisdiction where an employer must accommodate religious dietary practices. Employees should make their employer aware of fasting periods if the practice is likely to affect their performance. Certain workplace practices can be considered discriminative towards religious dietary requirements; consult our team of specialist solicitors for further in-depth information if you believe this could be the case.

The conventional complaint process set out by the business should be followed if an employee feels that a discrimination issue has been delivered. The first step is to make a verbal complaint to a manager, and if there is no suitable resolution, a written complaint should be made to the employer. Only when all the appropriate channels have been exhausted, and still with no suitable resolve, a tribunal may be raised to investigate the issue in a legal capacity.

A tribunal may only be brought against your employer if you have followed the ACAS Early Conciliation process.Any claim of discrimination must be made within 30 days of the act’s delivery or from the most recent act of discrimination.

A successful tribunal will declare the rights of the claimant.Where necessary, they will recommend the employer implements changes to their processes to avoid further similar cases from arising, and also award compensation to the victim.

Awards are made for injury and feelings and can include:

The Court of Appeal has guide bands for the amounts of the compensation, ranging from £800 for less serious cases to over £40,000 for the most serious.